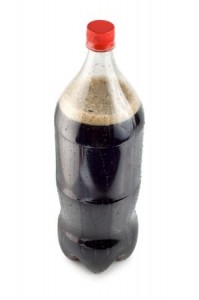 This morning I heard about a man who was upset about having to pay a 22-cent tax on his bottle of soda.

In a Chicago convenience store, he began to rant and rave about it before pulling a submachine gun out of his satchel. He threatened to kill everyone in the store, also telling a few customers that he was going to shoot each of them several times in the head. The whole incident was caught on the store’s surveillance cameras. Thankfully the police arrived in time to subdue him.

Later it was discovered that the gun had five live rounds of ammunition in one magazine, eight in another, and one in the chamber. It’s an absolute miracle that no one was hurt—not physically, at least—although I imagine that the emotional trauma this incident caused those who were there was mammoth.

It was because of a soda tax—this time. What do you suppose it’ll be about next time—maybe a broken shoelace? Will you be in the place where it happens next time?  Will your children? What about your spouse, your friends, your neighbour?

Ok, I know what some of you are going to say—that this was one isolated incident; that this kind of thing doesn’t happen very often and not in OUR town; that statistically violence is down and why am I worried about this anyway? Believe it or not, in my other recent blog posts about violence in schools (specifically in Pennsylvania and at the University of Calgary), I actually have had some people leave comments like that. Another guy sent me a detailed email with specific links telling me that there is no scientific proof that violence in the media contributes to the blatant and very disturbing violence we’re seeing all around us—even in convenience stores now because someone with entitlement issues happens to be disgruntled about a soda tax.

Basically the email sender was telling me that because scientists have not come up with any definitive links to what’s going on, I should stop having the (very strong) opinion that the violence we and our children are subjected to in the media, all around us every single day, is influencing the violence we’re seeing more and more of in our world—and that I should stop seeing all of this as a big deal. As a friend of mine likes to say, “There are no right answers to the wrong questions.”

And my answer to these kinds of rational lies is, “So what?”

How much more of this lunacy are you willing to put up with? How much longer do you want to be scared of going to buy something at 7-11, or attending a house party as a celebration of a wonderful event, or sending your children and grandchildren off to school each day? This horrible violence is bound to happen again, somewhere else, today or tomorrow, maybe in my neighborhood or yours—how can any of us think it won’t?

And we’re supposed to wait around for a scientist to make a link between violence on the street and violence in the media? Or maybe we’re waiting for ‘someone else’ to do something about all of this, so that we don’t have to get involved. How much more denial can we possibly be in?

Let’s remember that if we’re not part of the solution, we’re part of the problem. If we don’t take a united stand—NOW—in whatever ways each of us can, we will truly have no one to blame but ourselves.