Unfortunately, Toronto’s mayor Rob Ford has become quite the laughingstock. He’s the guy people love to shoot down at the water cooler—and anyone who watches late night TV is aware that of the comedic fodder he’s been supplying the hosts for far too long. I’m sure I’m not the only one wondering how this situation has gotten so out of hand, giving Canada a huge black eye on the international landscape.

The way I see it is that this sort of fiasco doesn’t happen overnight. Although I don’t know him personally, my best guess is that Mr. Ford has some major entitlement issues—he feels he can do and say whatever he likes, whenever he wants to do and say it, with no realistic grasp of the repercussions or why they should be leveled against him. Instead, he believes that he is entitled to live his life this way.

On the one hand, of course we are all ‘entitled’ to make the choices by which we live, as long as we understand that there will be consequences to every choice—some good, some bad, some ugly. But I believe that Mr. Ford’s consequences have become this ugly due, in large part, to the fact that he has been enabled by his constituents, fellow city officials, and very likely his own family, to be a screw-up.

Having had my own issues with addiction for many years, I have some deep compassion for Mr. Ford. We use addictive behaviors to change how we feel, to not have to face issues that seem too difficult to deal with, to maintain the choice of not dealing with the realities of our lives. Addiction is definitely for people who don’t want to handle reality, and reality is for people who can’t handle addiction. Mr. Ford falls into the first category—and I’m grateful every day that I now much more easily reside in the second.

We now know that Mr. Ford has used crack cocaine, by his own admission. Whether he is ‘addicted’ to it or not is anyone’s guess—although most people who use crack on any kind of regular basis become hooked very quickly. In my experience, anything we need to lie about as vehemently as he did about his crack use is often true.

But this isn’t Mr. Ford’s only addiction issue.

THE HUGE PRICE TAGS OF ADDICTION

Clearly this mayor has a history of becoming inebriated with alcohol—which is a legal, mind-altering drug in liquid form—and we now know that he has driven under the influence, again by his own admission. According to the polls reported by the news, there are still some people who actually think Mr. Ford can continue to successfully act as the Mayor of Toronto and others who remain ‘undecided.’ I think we have to wonder how a person who regularly becomes drunk and stoned with an illegal substance can remain in office and do anything close to a good enough job. How deep is our own denial about that?

And if all that wasn’t enough, he has now made public statements disparaging women sexually. Who is this guy and why is he still in office? Clearly he has few behavioral boundaries and even fewer verbal filters.

For me, it is Mr. Ford’s third and societally sanctioned addiction that is the most immediate concern, as I believe it has become a life-or-death situation for 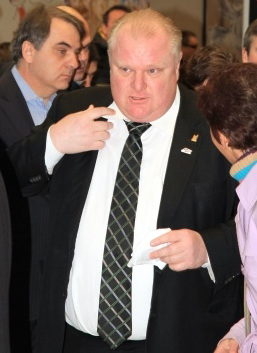 him. However, because most people turn a blind eye to it, he is enabled to continue doing it. One look at both Mayor Ford and his brother, Doug, tells me that these men are chronic over-eaters, and have been for a long time. They are both ‘morbidly obese’, so designated because this eating disorder can very well kill them both.

Have you noticed Rob’s continuously red face as the cameras click away? This is not about the shame he ought to be feeling about his ridiculous antics—this is about his poor heart trying to deal with all the weight he’s carrying. Although Doug is not as heavy as Rob, there is really only a hair’s difference—clearly neither is physically healthy. And because all addiction covers up unhealed emotional trauma, it is also clear that there is a lot of inner work they both need to do to overcome these patterns.

An as Addictions Therapist with over 26 years clean and sober, what I believe to be true is that the massive amount of weight Mr. Ford carries around with him, and the tremendous strain this is putting on all of his vital organs, will probably take him out long before any drugs or alcohol will—with the exception, of course, of a lethal overdose of either substance. But because so many Canadians turn a blind eye to the issue of eating disorders—especially that of over-eating—Mr. Ford will likely not be held accountable to take care better care of himself physically. If the alcohol and crack (substances that are often used together) hadn’t become the priority, Mr. Ford would probably have gone on blindly consuming the inordinate amounts of unhealthy foods that pack that kind of weight on a human body—and one day he would have just keeled over and died. Case closed.

My hope for him is that the team of professionals who he claims are now ‘supporting’ him will very swiftly address the need for decreased food and increased exercise—if he, in fact, values his life and would like to go on living for very much longer.

When we enable an addict of any sort—as Mr. Ford has been in my professional opinion—we are not doing that person any favors. Enabling happens when clear and healthy boundaries are not set for inappropriate behaviors, and this simply assists the addiction to continue. The very fact that Mayor Ford is still in office, after he admitted to using an illegal substance that other people are arrested for using, astonishes me. How can the higher-ups of the Toronto government say that there is no way they can oust him? How many blind eyes need to be opened?

As a therapist and recovering addict, I can’t help but wonder about the inner demons that so plague the Toronto mayor. What could he be running away from facing?

And even as his wife stands beside him in a strange show of solidarity after his chilling comments about prostitutes, it seems that the toll that all of this must be taking on his children is not being addressed either. What we understand today, in the addictions field, is that the loved ones of addicts suffer and struggle right along with them, leaving these loved ones with their own scars that will need to be healed.

The best way to remain in a ‘victim’ stance is to blame everybody else. Now that Mr. Ford is finally being held accountable for his atrocious behavior by those who have begun stripping him of his mayoral powers, he is coming out swinging—saying he will sue them and make their lives miserable. I wonder what his defense will be: “Yes, while I was the Mayor of Toronto, I bought and used illegal drugs, drove while drunk, publicly stated lewd and misogynistic comments about women—but, hey, what’s the problem? Why is everyone out to get me?”

If we don’t do Mr. Ford the favor of holding him accountable and help him choose to raise the bar for his overall behavior—as we would with any other citizen doing the things he’s doing—how will he live to get the help he needs to combat his various addictive behaviors and begin to live with the self-respect and integrity that we hope for in our elected officials? Now that he and his brother are being rewarded with their own TV show, I can only wonder how our collective denial can possibly be helping him take responsibility for himself and clean up his act—for the sake of everyone around him as well as for saving his own life?

What Rob Ford doesn’t seem to understand, as he sits mired in his own unbelievable denial, is that he is being given public attention now because he has become—by his own actions—a pathetic laughingstock and there are people who want to continue cashing in on him for as long as they can.

Let’s stop enabling this poor, sick man and start helping him to get well!