Okay, I’ll admit it – I’m a “Friends” fan. I have been since its inception so many years ago, and I’ve been known to watch a rerun every now and then. That show told an amazing story of six young people with very different personalities, values, and opinions who simply loved each other through all of it and would always have each other’s backs. It was funny and heartwarming, all at the same time.

My favourite character was Chandler Bing – I loved his irreverent sense of humour and, let’s face it, he was some lovely eye candy back in the day. Being in the addictions field, both as a therapist and as a recovering addict myself, I knew of Matthew Perry’s struggles but didn’t know very much of his story – until now, with his decision to share it with us.

I certainly didn’t know that he spent approximately $9 million on his recovery – which I find incredibly excessive. It’s hard to imagine that kind of astronomical cost: he must have gone to a number of very posh country-club-type rehabs to even come close to spending that much. This man has certainly had his ups and downs in life, as all addicts in active addiction do – but a great many of his were played out in the media for all to see. That can’t be an easy way to bounce between addiction and recovery. 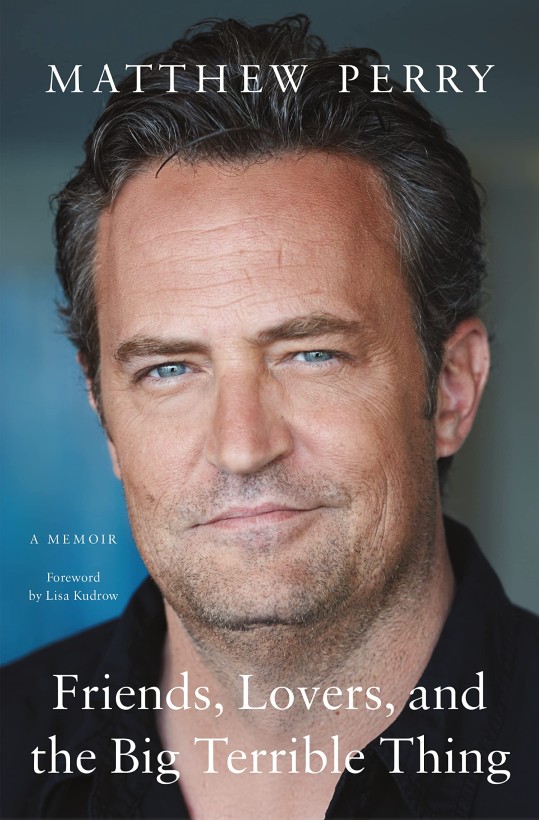 Why Matthew Perry Is Speaking Out Now

As I’ve watched Mr. Perry on the talk show circuit lately, the first thing I felt was compassion and respect for a man who truly wants to help. He clearly wants to share his story in order to make it easier for others to recover from addiction. Yes, I also believe he wants to sell his book – and as an author myself, I understand that. But I believe the difference here for him is the same as it is for me: even if I never made a dime on my book, if it helps families understand what addiction really is and how they can actually HELP the addicts they love so dearly – instead of continuing to enable them – then I would be happy.

I’ve heard Mr. Perry say recently that he wrote his book in order to help others come out of addiction. And while I think that’s true, I have an issue with some of the things he’s saying, and that is what I want to address here.

Clearly, the 12-Step model is working for him – and I’m glad for him. Whatever it takes to become and stay clean and sober is what’s required. The 12-Step “disease” model works for a lot of people. It worked for me, for about the first 10 years of my recovery. (I am currently 35 years clean and sober.) These groups are quite amazing and unique in several ways. There is the fellowship – being able to meet like-minded people who also want to have and maintain their sobriety. There is sponsorship for those who wish to have one designated person to help when an addict starts to wobble in their recovery. And there are a number of events to attend outside of scheduled meetings, such as getting together for coffee, dances, and “round-ups” all over the world. There is certainly no reason for any addict to feel bored or unchallenged as part of the 12-Step world.

Is Addiction Really a Disease?

One issue for me is the wording of several of the Steps, as well as the dogma that is passed down, year after year, generation after generation. The 12-Step teachings are supposed to remain pristine, exactly as they were written in 1935, by two financially successful white Christian males. In our completely diverse world now, in 2022, the wording of these Steps seems awkward and archaic to me, and certainly not a fit for a great many people.

But that isn’t my main concern. In his interviews, and most likely in his book, Mr. Perry speaks of his addiction as a disease – following the 12-Step teachings. He also says that he is powerless over his disease, and that he started using again many times because relapse is part of recovery.

I don’t believe that addiction is a medical disease. The Powers-That-Be want to call addiction a disease mostly because it has brain involvement, which of course it does. There is no question about that. But there is brain involvement in every single thing we humans do – for me, that doesn’t translate into addiction being a ‘disease.’

I have a disease – I’ve had Crohn’s Disease for nearly 50 years now – and these are two completely different situations. Although I have tried, and tried and tried, to get rid of Crohn’s, it never completely seems to go away and sometimes it’s a really difficult illness – even when I’m doing all the right things and trying to take the best care of myself that I can. Crohn’s is a horrible medical disease, just like cancer or diabetes. There are ways to mitigate them, but there seems to be no known cure for any of them. At 35 years clean and sober, I KNOW this isn’t true of addiction. We can kick addiction to the curb – forever – by making the choice to not use. It’s simple. Not always easy, but definitely simple.

And saying that we are ‘powerless over our addiction’ is just not accurate. We are not powerless over addiction. The truth is that addicts who are still in active addiction have not yet made the choice to stop. It’s really as simple as that. It’s often not an easy choice to make or to maintain, I grant you that – but it is a choice nonetheless. And the same is true of relapse. Relapse is NOT a “normal, natural part of recovery” as many addiction specialists would like us to think. Relapse occurs when the recovering addict makes the choice to start using again. In 12-Step literature, relapse is also known as a SLIP – an acronym for “Sobriety Loses Its Priority.”

How can that be anything other than a choice?

The Pitfalls of the “Disease” Model

In my personal and professional opinion, telling addicts – and their weary, confused, terrified families – that addiction is a disease that the addict has no control over and that they will very likely relapse is nothing short of DANGEROUS. It takes away personal responsibility and does nothing to hold governments and Big Pharma accountable. It’s an enabling stance – and it’s exactly why addiction is more of a problem today than it was last year, or the years before. We need to start seeing addiction as what it is: a way to not have to deal with life on life’s terms. Addiction isn’t even really about the actual substance or behaviour being used as the escape hatch. It’s about the deep pain and trauma underneath all of those astonishingly difficult feelings and memories and faulty core beliefs about themselves that the addicts are desperately trying to divert themselves from.

I don’t believe that anyone chooses to become addicted – I know I didn’t and I can be reasonably sure that Mr. Perry didn’t either. But once we find ourselves in active addiction, we have that age-old choice to make: Do I Stay or Do I Go? Will I choose to stay in active addiction and continue hiding out – or will I decide to go into recovery and start making healthier choices for my life? There is only one person on the planet who can make that decision for an addict – the addict must decide whether he or she is willing to do the inner work that it takes to face life and recover. It may not be an easy choice to make – but in my personal and professional experience, it’s a much easier choice than remaining in active addiction.

And, by his own admission, that is exactly what happened with Mr. Perry. He chose to relapse over and over and to basically stay in active addiction for a number of years – until his doctor laid it out for him. He had been using so many different drugs, including opioids which can cause severe bowel problems, that his colon exploded. His doctor basically told him that he could either become clean and sober, or he could continue using drugs and wear a colostomy bag for the rest of his life.

We know what choice he made – and he’s been clean now for about a year and a half at the time of this writing. He is now doing what every single person who chooses recovery does: he makes the choice, each and every day – sometimes each and every minute – to remain clean and sober, one day at a time. That’s what we all do in order to stay in recovery, even when we feel like we can’t bear it for one more second – even when we have many years of continuous abstinence.

I believe that Mr. Perry wants to help other addicts, and I respect that very much. But in order to really do this, I believe it would be wiser for him to tell them the truth about addiction. This is not a disease and we are not powerless over it. And one day at a time, none of us has to relapse. We don’t need to shame addicts or lay a crippling stigma at their feet. But we do need to start understanding them and stop enabling them to keep using.

We need to tell the addicts in our lives that they have a choice. As the people who care about them, we need to stop supporting addiction and start supporting only recovery.

Remaining in active addiction is all about CHOICE – nothing more and nothing less. We need to love our addicts enough to do what’s right for them, even when it’s uncomfortable for us. Mr. Perry’s doctor did the most loving thing he could do: he told his patient the truth – that he had a choice to make. We need to do the same thing. We need to stop enabling the addicts we love by telling them the simple truth about addiction.

This is the way our society as a whole will stop loving our addicts to death.

This is the way we will finally start loving our addicts to life.