Today I received an extraordinary email from Ward Grant.

In case you missed seeing him interviewed on TV, Ward is the man who started Vancouver’s “Wall of Hope” – after feeling so angry and disheartened to see what was happening to our amazing city after the final Stanley Cup game, he was one of the first to take positive action.

The morning after ‘the night before’, Ward came downtown with a handmade poster he had created – a sign that told both the team he supported and the people of his beloved city how he felt. He arrived at what would become the Wall of Hope and put up his profoundly simple poster for the world to see, even before he knew how anyone else felt about what had happened. He needed to do this – it was a mission of love and healing for him, not to mention a gift to Vancouver.

In my eyes, his was an act of courage on so many levels, as being the first to speak out against injustice so often is. I understand, because at the same time he was hanging his sign that morning, I was writing my first blog post about that horrible night – and we were essentially saying the same thing.

I have never met Ward Grant in person, but tonight he sent me an email asking a favour of me — which I am about to fulfill here after asking his permission to do so.

I want to share his email with all of you:

My name is Ward.  I watched in stunned disbelief as my city burned.  In the morning after, I decided I could not and would not accept what had happened.  I didn’t want the small group of %^#@@ to present this city to the world as the Kabul of the west coast.

I decided to paint a poster and went down early to hang it up on the Bay building.  I was hoping no one would notice, but as it turned out, someone did. 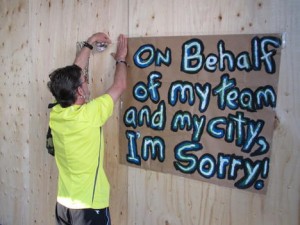 Global news and the Georgia Straight were there, and when I was asked why I was doing what I was doing, I challenged everyone who were sickened by the violence to come down and show their support for the good people of this city and sign the boards.  I hoped maybe a couple might get signed.

At 3:30 pm that afternoon, I wandered down to see how things were going.  I was stunned.  All the boards, all the way around the store were being signed.  I sat on a bench across the street on Granville and tears streamed down my face…really grateful for sunglasses right then!

Please thank the citizens of Vancouver and the Lower Mainland for me.  Thank those who took the time to sign a piece of plywood; who chose to stand with me in support of the good people who live here; who chose to stand with me in defiance of those who would choose to be less than they can be.  Perhaps all of us standing together can show them that to aspire to be better than we are fosters life and growth and friendship and peace and love and all those ideals that somehow are getting lost in the rush to be in a hurry.

Thank you, Ward, for being so brave and so honest, for being the role model we all needed right then and there. Thank you for entrusting me with your request – I am honoured to fulfill it.

Thank you for showing your love to Vancouver and for being one of our healers – you will not be forgotten.